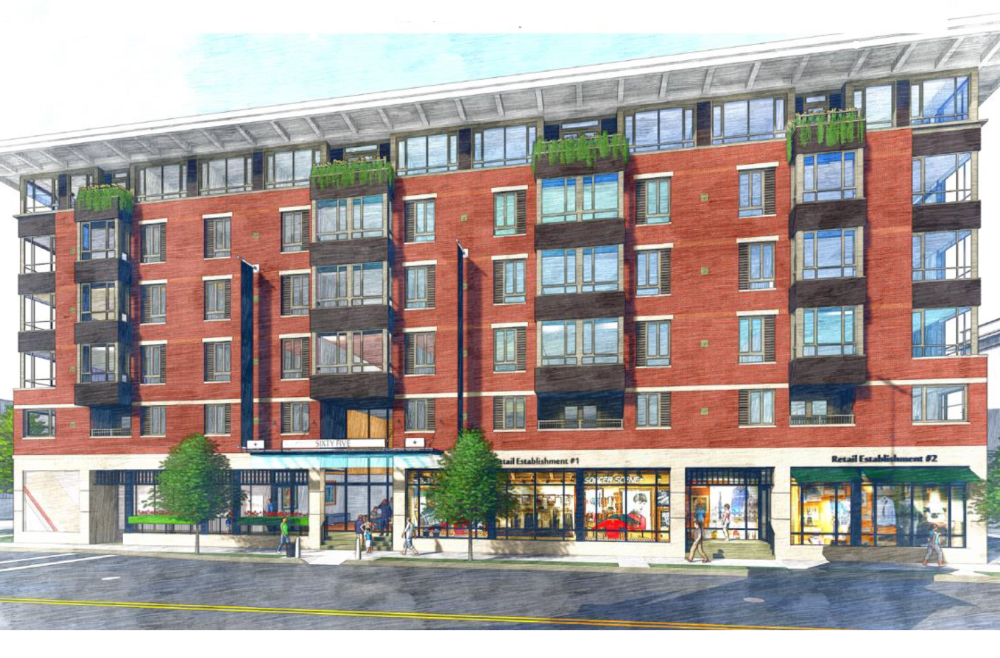 Salem, MA The joint venture of Urban Spaces and Diamond Sinacori held a groundbreaking ceremony for BRIX, a 61-unit, mixed-use condominium development in the heart of downtown Salem. Salem’s first concierge building, BRIX will provide downtown Salem with sophisticated urban residences and 3,000 square feet of retail/restaurant space. Located at 65 Washington Street, BRIX is a short walk from the Salem Commuter Rail Station into Boston and just steps from the shops, restaurants, and museums of the picturesque Federal Street District, which is listed on the National Register of Historic Places.

“We’re excited that the former Salem District courthouse will be replaced with a signature, mixed-use building,” said Salem Mayor Kim Driscoll at Friday’s ceremony. “BRIX will bring much needed housing downtown – some affordable, some market-rate, some new commercial space. This building will be part of our community’s on-going effort to transform the northern part of our downtown to better serve as a welcoming entryway to Salem. It will really make a difference and I am thrilled to see this work starting today.”

Designed by Tise Design Associatesof Newton and to be constructed by Groom Construction of Salem, the 110,000 square foot BRIX development will be comprised of eight one-bedroom, 44 two-bedroom and nine three-bedroom units. Units will range in size from 800 to 1,700 square feet with prices starting in the mid-$400,000 range. Building amenities will include a tranquil roof terrace, club room, pet spa, and fitness studio. The building will also include a two-level parking garage to accommodate 88 vehicles.

“A vibrant city requires an array of housing options and we’re excited to add a new home ownership opportunity to the heart of downtown Salem. The groundbreaking represents the culmination of many years of thoughtful planning. We’re pleased to have achieved this important project milestone and look forward to BRIX contributing to the streetscape and neighborhood,” said Paul Ognibene, chief executive officer of Urban Spaces.

Urban Spaces partnered with Ken Foster, SVP of Commercial Banking and Kevin Rourke, SVP and Commercial Banking Division Head at Salem Five Bank to secure $20 million of debt financing. “With a partner like Urban Spaces/Diamond Sinacori, who has delivered on urban renewal work so successfully in other areas, we’re confident in the project’s potential to deliver a vibrant option for downtown living and retail in the city,” said Foster.

The project also benefited from the Commonwealth’s Housing Development Incentive Program (HDIP) which provides Gateway Cities like Salem with a tool to increase residential growth, expand diversity of housing stock, and support economic development. BRIX will be the first condominium project to utilize the HDIP program.

BRIX will be constructed on the site of the former federal district courthouse, which had been designed in the “Brutalist” style of architecture and had sat vacant for several years. The foundation of the courthouse will be re-purposed for the project, which will speed up the construction process and reduce the level of disruption to the neighborhood.