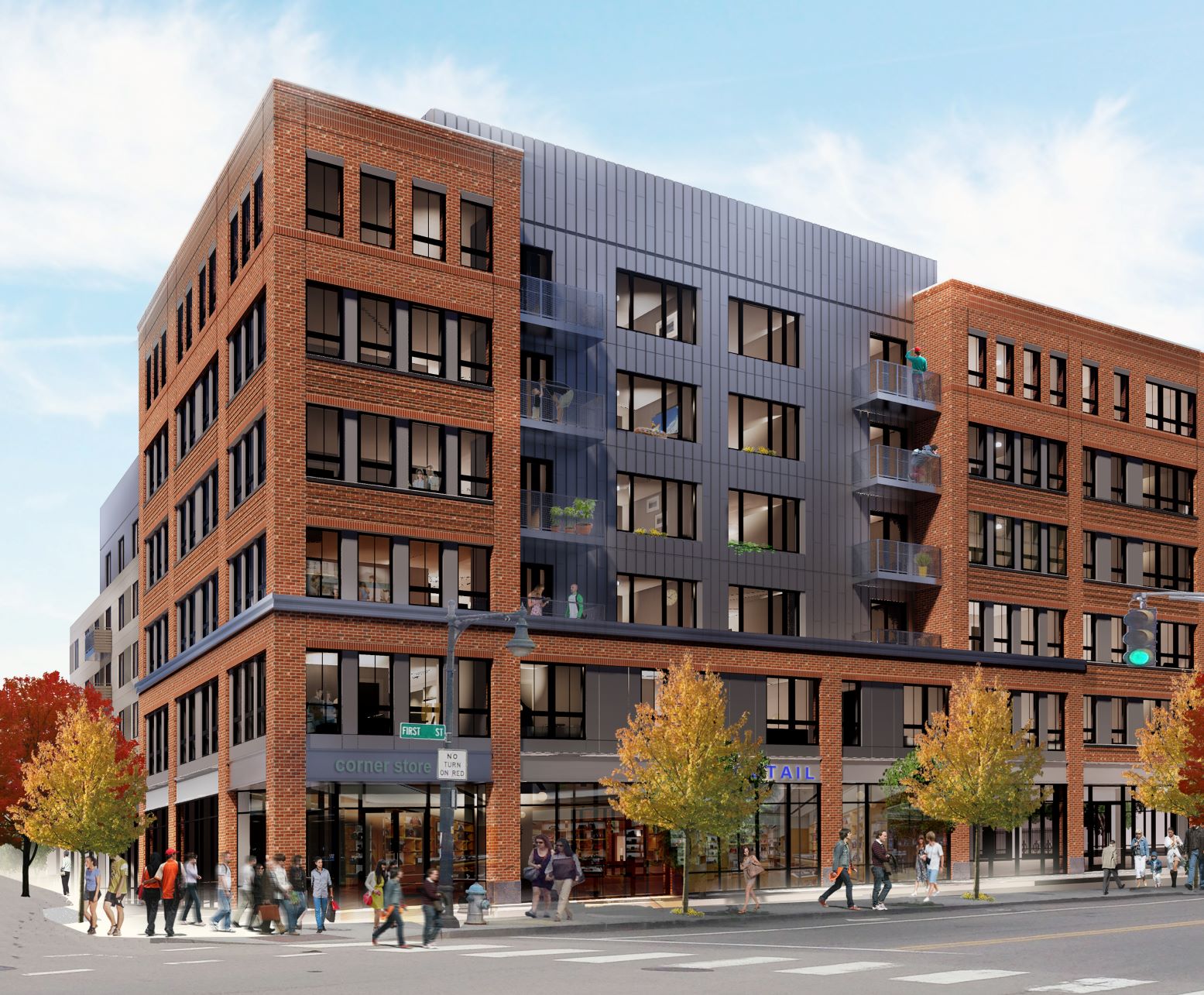 Cambridge, MA One of East Cambridge’s bustling corridors is poised to become even more attractive to shoppers and those looking for a new apartment home.

A $95 million undertaking known as Kendall East is giving real estate development firm Urban Spaces the opportunity to bolster the area with a new mixed-use development along the popular First Street thoroughfare. The project, located on the site of the firm’s former headquarters, will feature 136 residential units and nearly 15,000 square feet of street-level retail space just across from the one million square-foot CambridgeSide shopping destination.

Paul Ognibene, founder and CEO of the firm, says the project will ultimately go a long way toward enhancing the growth of the area, which stretches between the MBTA’s Kendall Square and Lechmere subway stations.

“We’ve seen a tremendous amount of activity in East Cambridge,” Ognibene says. “We’ve been playing a part in that and doing what we can to add even more vitality to the neighborhood.”

Kendall East will feature a green space mid-block connector, pet-friendly amenities, a two-level underground parking garage with 142 spaces, and surface parking for the retail destinations—a valuable commodity in the busy urban center. The development will also include over 150 spaces for bicycle parking.

If all goes according to plan, Ognibene says Kendall East should be completed in 2021. The buildings were designed by architect Perkins Eastman and are being constructed by Tocci Building Corporation.

Kendall East won’t be the only Urban Spaces development along the First Street Corridor—the company has assembled ten properties along First Street in the last seven years.

The Axiom, a 115-unit apartment building with 3,800 square feet of ground-floor retail space, home to the iconic Toscanini’s Ice Cream, was the first Urban Spaces foray into the First Street Corridor. The contemporary-looking building earned acclaim for its half-mile proximity to the renowned MIT campus and an overall walkability score of 91. Construction was completed in June 2015 and units were quickly leased.

Another predecessor to Kendall East was completed by Urban Spaces in September 2018 on the former site of Big John’s Mattress Factory. The five-story office building at 121 First Street features 51,500 square feet of Class A office space and 6,700 square feet of first-floor retail. Urban Spaces recently opened its new headquarters on the first floor of the building. The majority of the building is leased to the online automotive research company, CarGurus.

In addition, Urban Spaces completed a stand-alone, 10,000 square-foot retail space along the First Street Corridor in September 2019. What once was considered an underutilized warehouse is now a home to Loyal Companion pet supply store, a Sherwin-Williams paint center, and a United States Post Office.

Thinking tiny can be huge

While the lure of spacious apartments and retail space might appeal to the average city dweller, other projects undertaken by Urban Spaces have taken a different tack altogether.

For example, Urban Spaces co-developed 180 micro-units on Commonwealth Avenue adjacent to Boston University. The building features a flagship Caffé Nero coffee house and pushes the very boundaries of minimal living space, the unit sizes averaged 350 square feet. As the Boston Globe reported in September 2016, the entire six-story building was rented by the university to house incoming students—a sure win for the development firm.

“If you have a well-designed, carefully thought-out space and then integrate in things like movable furniture and other features to make a small space more efficient, micro-units can really be quite livable,” Ognibene says.

Relatively affordable rents were a departure from the high residential pricing associated with the greater Boston area, making the micro units a popular offering. At the time of completion, Ognibene says the project was the largest micro-unit apartment building in the United States.

“1047 Comm. Ave. is a great building because it gives people the opportunity to live in the city, pay less rent than they would otherwise, and still have a terrific living experience,” Ognibene says.

As Urban Spaces recently celebrated its 15-year anniversary in October 2019, the team is eager to continue to shape and expand the development firm’s portfolio in new ways, creating transformative residential and commercial projects in New England for years to come.